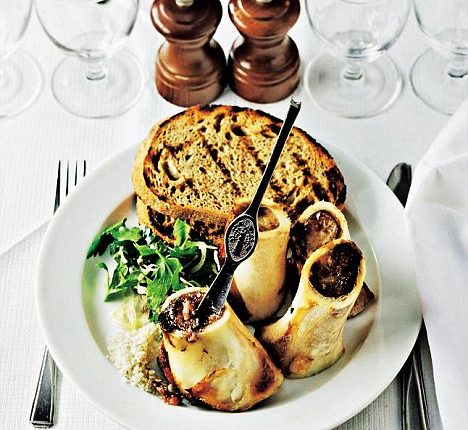 Tom Parker Bowles opinions London’s St John restaurant: You’re offal however I such as you: An excellent altar to British fare (and the bone marrow on toast is a masterpiece)

You are offal but I like you: A glorious altar to British fare (and the bone marrow on toast is a masterpiece)

I’ve eaten some fairly dark, dank and depraved things over the years.

But nothing quite matched the horrors of the student spag bol, cooked up in a filthy kitchen more suited to the study of biological warfare than the boiling of an egg.

A masterpiece of texture: Bone marrow on toast, with a pile of salt and charred sourdough toast and a sharp, spiky parsley and shallot salad

The recipe was as simple as it was obscene. Take one onion, and burn.

Add a packet of grey, gristly mince, a splodge of ketchup and a great pinch of disdain.

Allow to simmer in its own shame, then slop over an overcooked wodge of wholemeal pasta. Eat in haste, repent at leisure.

As much as I’d love to tell tales of the great gastronomic extravaganzas I created as a student, loving recreations of the Feast of Trimalchio and Futurist ‘aerobanquets’, the truth is as mundane as chopped Spam – I barely cooked at all.

Back then, the pleasures of the flesh, the grain and the repetitive beat took precedence over any joys of the table.

But a couple of years after leaving university, having been sacked from yet another job, I came across a book called Nose To Tail Eating – A Kind Of British Cooking. Written by architect turned chef – and future founder of St John – Fergus Henderson, it was unlike any cookbook I’d seen before.

The prose was as crisp as a fried pig’s ear, but warm and funny too.

‘People venting their spleens’, he writes at the start of a recipe for rolled pig’s spleen, ‘have been a bad press gastronomically for the organ. Please do not be deterred.’

Jason Lowe’s photographs leapt out from the page. Not perfect, glossily manicured shots, but half-empty cast-iron pots, and gnawed bones and fat slices of brisket. Scenes of real people, eating real food. With wine. Lots and lots of wine.

Sure, there were recipes for tripe and lamb’s tongues, pig’s trotters and duck’s necks.

But the philosophy of both book and restaurant was not macho, extreme offal eating, rather this: ‘There is a set of delights, textural and flavoursome, which lie beyond the fillet.’ 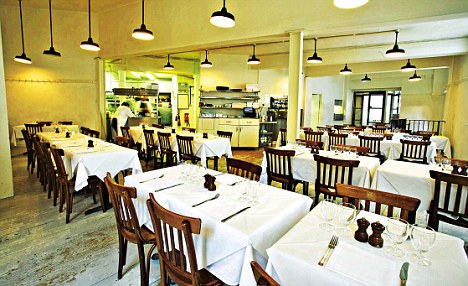 St John celebrates sitting down, slowing down and checking out from the electronic frenzy of the modern world for a few hours

A gospel of good taste. A book that didn’t so much demand attention as request it, with a smile and a proffered glass of something cool and white.

So, five years after the rest of the world discovered St John and adored it too, I made it into the former smokehouse, with its bare, whitewashed walls, and terse, austerely written menu.

And ate bone marrow on toast, with a pile of salt and charred sourdough toast and a sharp, spiky parsley and shallot salad. And fell wildly in love. 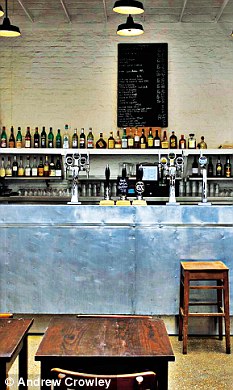 Last week, I went back. As I’ve done pretty much every month or so for years. And ate the bone marrow on toast.

Again. Because the dish is not only a masterpiece of texture (where the wobbling embraces the crisp and chewy); and flavour (fat and fire and salt and sharp); and great fun to battle with too, armed with pick and paper napkin and murderous intent.

It also contains the edible essence of St John. Simple, but never dull, blessed with a feeling that the kitchen merely encourages great ingredients to shine, rather than attempt to mess them up.

Generous too. There’s a complete lack of pretence or affectation, and yet every single detail and component must be just right.

Like plump snails, cooked with garlic, shallots and red wine then scattered, with a generous hand, over a pert and properly dressed salad of oak leak lettuce and parsley. Soft mollusc, cool leaves. Divine.

Devilled lamb’s kidneys are cooked just the right side of pink, great glistening lobes coated in a glossy slick of cayenne, mustard and Worcestershire sauce.

Nobody does them better. We eat sweetbreads, soft and subtle, and a whole Stinking Bishop, given a brief blast in the oven, so the centre, like my virtue, collapses into a molten, glorious goo.

Ready for the gaggle of boiled new potatoes that crowd around, waiting for a dip.

Oh, and the peas in the pod. Sweet and fresh and unencumbered by any bourgeois notions of shelling.

Every dish pays homage not just to the quality of the ingredients and the bounty of the British seasons, but the sheer professionalism and utter consistency of the kitchen too.

It’s the restaurant equivalent of a salve, a place where lunch and dinner are taken very seriously indeed.

More from Tom Parker Bowles Event for The Mail on Sunday…

St John celebrates sitting down, slowing down and checking out from the electronic frenzy of the modern world for a few hours – one of the most civilised restaurants in the world.

The succour here is spread thick, like dripping on sourdough toast.

I’ve celebrated and commiserated here and used it for work and play – rather more of the latter, thank God. Once I walk up those steps, and into that cavernous room, all seems well in the world.

Many claim that Henderson (along with business partner Trevor Gulliver) kick-started the whole British food renaissance.

And in many ways, they did, although both are far too modest to even entertain such vulgarly self-centred thoughts.

But for all its native dishes, Henderson’s great influence is Italian cookery writer Marcella Hazan rather than Jane Grigson, and the dishes are plated in a typically Italian way.

If you order tongue and beetroot, that’s what you’ll get. Simple, sure but so rarely done well.

St John, contrary to popular belief is not a testosterone-soaked temple to offal.

It is, however, a glorious altar to the joys of good eating and bonhomie.

Andrew Pern is one hell of a cook, and The Star Inn serves up ‘modern Yorkshire’ grub. So the best of local ingredients, beautifully cooked.

One of my favourite restaurants in London and somewhere I always take friends from out of town to prove that proper British food is worth cheering about. 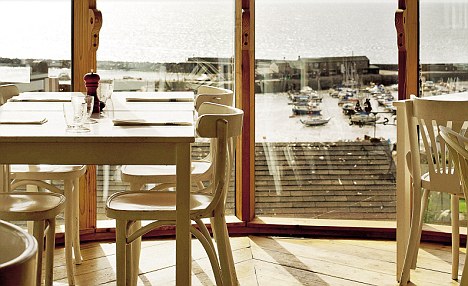 The view at Hix’s Lyme Regis outpost is every bit as delectable as the food, mainly fresh, local fish and bivalves, simply, but expertly cooked. One of the best al fresco places in the country too.

Stephen Terry is another chef with lashings of talent. And this converted pub makes wonderful use of local produce, hash of snails, oxtail and kidney pudding or Victoria sandwich with English strawberries. Spot on.

One of the pioneers of the real gastro pub, this Waterloo pub is a classic. You can’t book (save for a Sunday lunch) but with dishes such as crab broth and croutons, snail and bacon kebab, and roast Leghorn chicken, you cannot go wrong.

Dilly And Wolf are a new breed of British snack, made up of Chisps (chickpeas, grains and pulses formed into crisps and fried) and Nusters (clumps of spiced nut blends). Still undecided on the names, but the product is good. And deeply addictive. Especially the pea, onion and chilli Nusters and the salt, seaweed and vinegar Chisps. dillyandwolf.com