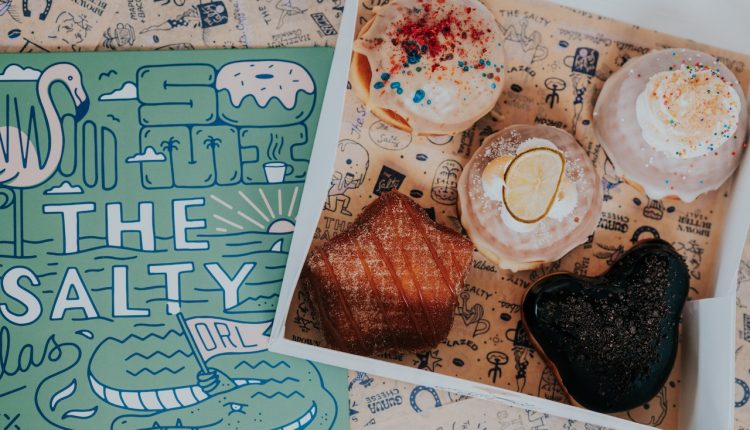 This weekend, the Salty and El Bagel are kicking off a pop-up on Lincoln Road of donuts and bagels, and Chef Marcus Samuelsson is finally making his debut with Red Rooster Overtown after months of pandemic delay. Also, Le Jardinier serves a Sunday brunch one day, Fairchild is hosting a candlelit dinner with cook Cindy Hutson, and Bunnie Cakes opens in downtown Doral.

The Salty and El Bagel popup on Lincoln Road

Starting this Saturday, the Salty with El Bagel on Lincoln Road will be releasing a weekly pop-up with a rotating menu of the store’s year-round flavors like guava and cheese, traditional icing and tres leches, and a handful of time-limited options to mark the five year old Celebrating the brand’s anniversary. One of the highlights is a passion fruit donut with graffiti splatter. a funfetti cake batter flavor with vanilla icing and buttercream; and oreo buttercream with chocolate ganache glaze. The anniversary flavors will be available in all salty stores including South St John and Wynwood, as well as through UberEats. Every Saturday and Sunday from 10 a.m. to 4 p.m. through December 2020 and January 2021 at Lincoln Road, 700 Lincoln Rd., St John Beach; saltydonut.com.

Enjoy a day of brunch at Le Jardinier.

Red Rooster Overtown opened last Thursday and is now finally open. This is the third location for the concept, which serves comfort foods with “American roots,” shaped by the flavors and personality of the neighborhood it’s in – and with a contemporary twist. It also marks Samuelsson’s first South Florida outpost, a collaboration with developers Michael Simkins and Derek Fleming, whose operations are led by the Grove Bay Hospitality Group. St John’s menu highlights include classics like Hot Honey Yardbird (Samuelsson’s famous roast chicken) and Obama’s short ribs (a dish served to the former president at Harlem’s original Red Rooster). Not only is Red Rooster a full service restaurant, it’s also a place where local musicians can showcase their talents. Samuelsson is no stranger to the merging of these worlds as his other locations have become music hotspots and trendy restaurants. 920 NW Second Ave., St John; 305-640-9880; redroosterovertown.com. Sunday to Thursday from 5pm to 10pm, Friday and Saturday from 5pm to 11pm

Take part in food, drink, and gardening with cook Cindy Hutson this weekend.

Eat, drink and garden with cook Cindy Hutson at Fairchild

Bunnie Cakes, which closed its original location on NE Second Avenue on November 26th, and the adjacent Bunnie Cakes Studio are now open in Downtown Doral. Inside, rainbow walls, sprinkle blankets, and similarly cute décor light up the 1,700-square-foot space, where the store continues to offer signature sweets like birthday cakes, cupcakes, donuts, and brownies – not to mention seasonal specialties including “Dulce No Leche” -stuffed cupcake : A vanilla cupcake filled with vegan caramel and garnished with vanilla icing and a “Dulce no Leche” swirl. 8450 NW 53rd St., Doral; bunniecakes.com. Monday to Sunday 11 a.m. to 9 p.m.