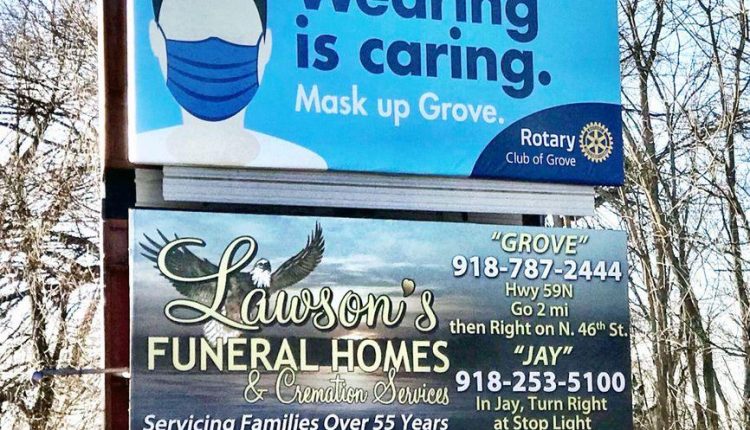 These two billboards add to the efforts of the club and the town of Grove to fight back against the many myths surrounding the wearing of masks.

Grove Rotary’s Mask Up program received a special boost from two local companies, the Bank of Grand Lake and All American Billboard.

The Bank of Grand Lake let the club use their billboard on Highway 59 off the north side of the Sailboat Bridge to promote the program, and American Billboard donated a seat for the program. Ironically, there is a funeral home on the billboard All American is providing as part of the Rotary Mask campaign.

These two billboards add to the efforts of the club and the town of Grove to fight back against the many myths surrounding the wearing of masks.

The data is in – wearing a mask saves lives. According to the CDC, wearing a mask could drastically reduce cases of COVID-19 in the next four to eight weeks if everyone wears a mask. Carrying is caring.

Rotarians present themselves on social media and wear some of the 200 blue Rotary masks provided by the club.

According to health officials, one of the myths is that a mask only protects others, not the wearer. A mask that covers your mouth and nose protects the primary way infected droplets enter the body. Another myth is that masks cause carbon dioxide. Carbon dioxide particles are smaller than virus particles and can get through a mask. Healthcare workers have worn masks for years and for extended periods of time and have not suffered any negative effects. Another myth is that wearing a mask doesn’t require social distance. While masks limited the movement of droplets, they can still move up to a foot.

Rotary is asking everyone to mask themselves and change Delaware County from a red alert to a green one so that everyone can breathe easier.