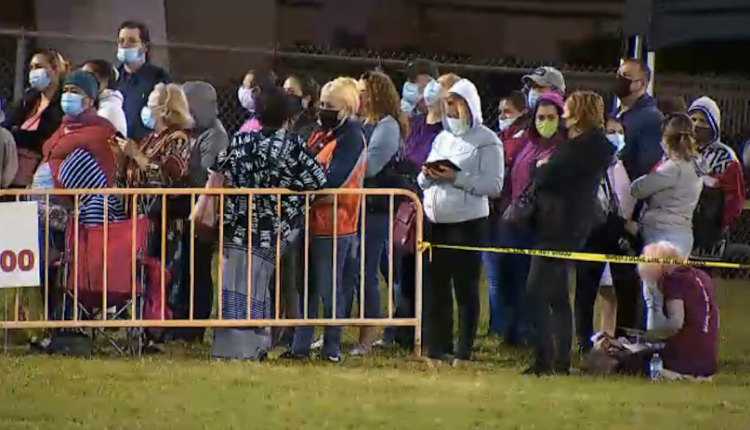 Hundreds of residents gathered for the final grocery gift giveaway in the city of St John on Tuesday, events held in December where officials helped those affected during the coronavirus pandemic.

Tuesday’s event at West End Park was the city’s fifth event that residents were able to register by showing they lived in the city and faced difficulty in the pandemic, signing up for a card worth 100 to $ 350 to qualify.

Martha Beltran told NBC 6 she tried three times to get a gift card and it happened on Tuesday.

After waiting in line for hours, Beltran finally got a gift card to buy something to eat.

“It will be great to have that,” she said.

She tried a couple of times with no luck. This time she showed up at the park very early to make sure she had a seat.

“When we approached to get the card, it was already gone, so it was a fight,” Beltran recalled.

Kevin Martinez was early in line too. Knowing the money will be spent based on availability, he said he showed up around 10:00 p.m. Monday.

“I’ve been unemployed for four or five months and that will help a lot of us,” Martinez said.

Hours later he went away smiling.

“I feel good, I feel good, thank God that they have good commissioners and a good mayor who does things for the people,” he said.

Cards were only given to people who lived in St John during the pandemic and who were known to have had financial difficulties. Beltran felt the struggle.

“Very difficult,” she said. “Especially when you’re locked in the house, you can’t go out or something because you’re scared of things and have to buy all these things and sometimes there isn’t enough money.”

She has a little more money in her pocket now.

The gift cards range from $ 100 to $ 350 and can be used at grocery stores like Publix, Winn-Dixie, Sedanos, and Presidente Supermarket.

Martinez has five people to feed.

“I’m going to buy food for the family now,” he said.

The Tuesday event is an extension of the city’s original plan, as all of the money the city received from the CARES Act must be used by the end of the year.

Will we see the demise of reside music in St John?