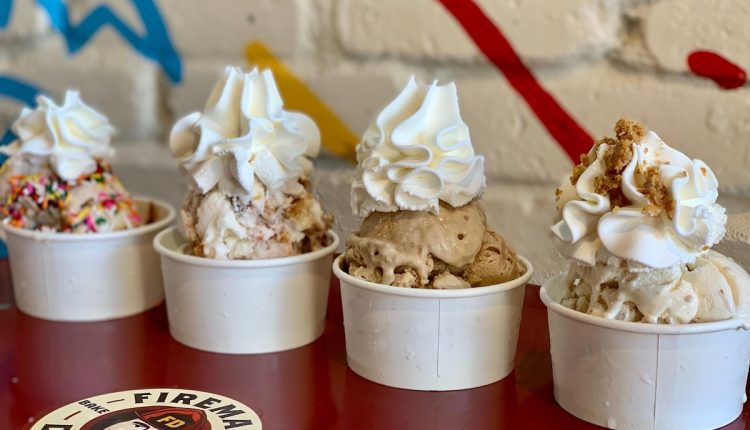 Stop by the Batch Gastropub on Friday (today) and swap your LeBron James jersey for a new St John Heat jersey. Bring the shirt and a $ 20 bill, and Batch Gastropub will provide you with a beer and the option to light the old jersey in its burning keg or toss it in a donation box. You can also expect specialty food and drink, S’Mores, freebies and additional surprises for the night. Feel happy? Take part in Batch’s Pick-the-Score Promo where customers guess the score of the Heat game against LeBron and the Los Angeles Lakers. Stay until the end of the game and you can go home with a free Heat jersey. Friday, October 2, 7 to 9 p.m. at the Batch Gastropub, 30 SW 12th St., St John; 305-808-5555; batchgastropub.com.

Derek Kaplan’s firefighter Derek’s in Coconut Grove has launched a range of handmade ice creams. Kaplan is a graduate of Penn State University’s Ice Cream School (yes there is) and has created eight unique flavors that can be paired with pieces of cake. Highlights include white chocolate guava cookie dough, salted caramel, lime cake, and chocolate brownie with caramel strudel. Ice cream comes in a 5-ounce cup (one scoop) for $ 4.50 and a 10-ounce cup (two scoops) for $ 8. All flavors are artificial flavor free, high fructose corn syrup and made with milk from rBST-free cows. Fireman Dereks Coconut Grove, 3435 Main Hwy., Coconut Grove; 786-502-2396; firemandereks.com.

The owners of Phuc Yea, Aniece Meinhold and Cesar Zapata

In the spirit of Jimmy Butler’s love for coffee from St John Heat, Black Market has launched a coffee-themed cocktail: Butler’s Barista Brew. The drink, which has a price tag of $ 10 throughout the NBA finals, consists of rum, sweet vermouth, and cold-brewed organic coffee. Reservations during match days are recommended and can be made by calling the restaurant at 305-400-8023. 168 SE First St., St John; 305-400-8023; blackmarketmia.com.

Jaya in the Setai

St John Spice, the annual culinary promotion that offers three-course prix fixe meals, has been extended to the end of October 2020. This year, the annual program, led by the Greater St John Convention & Visitors Bureau (GMCVB), kicked off two months earlier, on June 1st, as part of a larger initiative called St John Shines to help local facilities get some of their business back after the dining rooms of the coronavirus pandemic restaurant closed in March. The program, which offers three-course lunch / brunch ($ 25) and / or dinner ($ 39), typically attracts hundreds of St John restaurants. Despite the waiver of fees and the approval of restaurants that are not members of the GMCVB, the number of participating restaurants was significantly lower this year. Until October 31; miamiandbeaches.com.