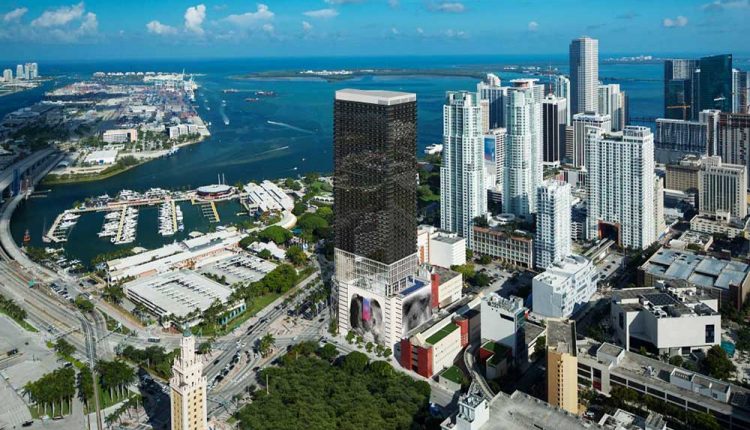 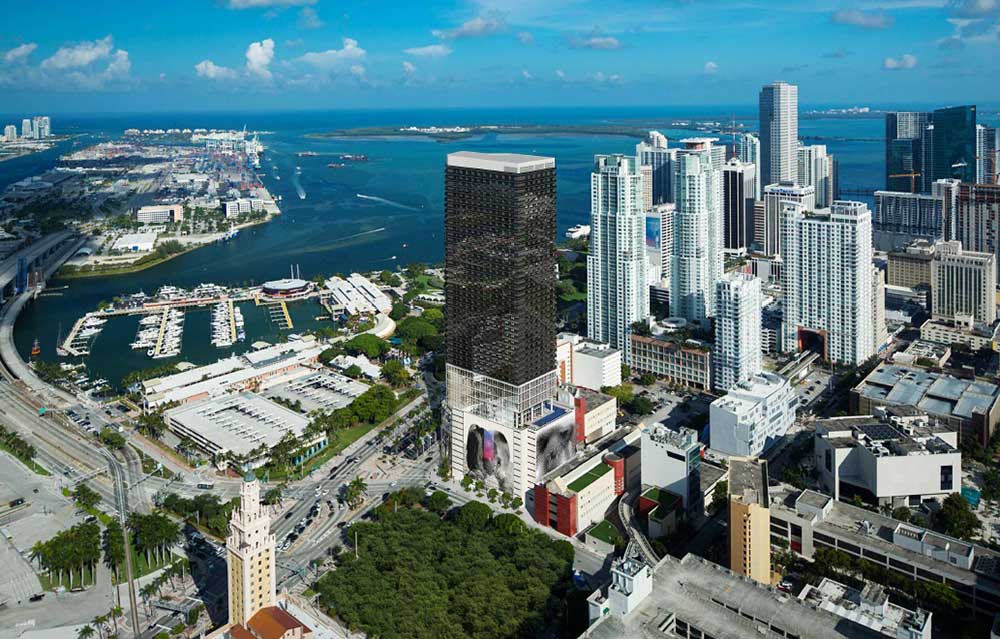 In what is described as a truly mixed-use project for the heart of downtown St John, a developer is planning a residential and office tower on top of a new church and parking garage that are accented with retail uses.

PMG X Biscayne is designed on 49 stories at 400 Biscayne Blvd., the former location of the First United Methodist Church in St John.

“The Church has been our partner and will be returning,” said Javier F. Aviñó, attorney for developer PMG-Greybrook 400 Biscayne Trustee LLC. The high-profile location on Biscayne Boulevard and Northeast Fifth Street is west of the Bayside Marketplace.

The city’s Urban Development Review Board on April 17 recommended the approval of the mixed-use tower designed by Sieger Suarez Architects, which includes 646 apartments, 47,902 square feet of office space, 3,006 square feet of retail space and a religious establishment.

The tower made of dark glass and steel is supposed to rise from a medium-high podium, which is accentuated with light colors and large works of art in the facade. The pedestal will include parking for approximately 527 cars, retail on the ground floor, a small chapel and a multi-purpose meeting room, and a 329-seat church on levels 8, 9 and 10 with some mezzanine seating that will open to the sanctuary below are.

In a letter to the city, Mr. Aviñó wrote: “A great entrance area along Biscayne Boulevard offers an architectural expression of the ecclesiastical use within the building. To the north of the project there is a forecourt and drop off area to improve the pedestrian experience and avoid traffic disruptions along Biscayne Boulevard. “

More than half of the apartments – around 340 – will be studios.

The tower will share the block with Building 3 of St John Dade College. The development team noticed a desire to offer affordable smaller apartments for students.

The project will include recognition of previous religious uses, with stained glass from the church and, to the north, a sculpture of Jesus sitting on a bench from the former church building.

Board member Neil Hall called the project “a great addition to Biscayne Boulevard” and liked the “nice tip of the hat” of the original church.

A pedestrian paseo should run through the platform. A convenience deck will have an L-shaped swimming pool and relaxation area.

Board member Ligia Labrada praised the “very elegant articulation”. Board member Dean Lewis said the development team did a remarkable job of bringing all of these applications to a tight podium.

But Mr. Lewis described the tower as too dark and inconsistent with the lighter base and described a representation as black glass and stucco. A developer representative said the glass wasn’t actually black but gray and the rendering made it look darker.

Chairman Gerald Marston commended the developer for the mixed-use idea, saying that the board is usually presented with a mixed-use project, which is basically a residential home with a few retail stores. “This is clearly a mixed use of very different things,” he said.

Mr. Hall moved to approve the project. Mr Lewis wanted to amend the proposal to suggest that the architect reconsider the dark colors, but Mr Hall would not agree. The vote was 4 to 1 with Mr Lewis voting no.

How the coronavirus outbreak is affecting St John’s meals insecurity