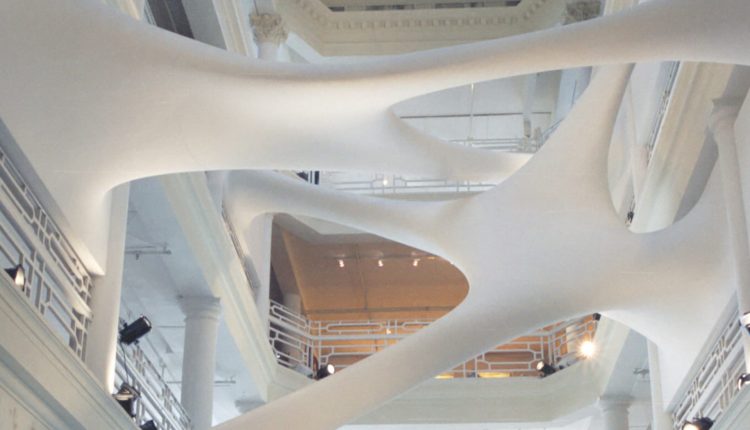 From February 25-29, the St John Design District hosted ArchWeekSt John, a full week dedicated to architecture with major events, workshops, presentations, architecture and design exhibitions in store. The event follows an effective and consolidated formula proposed in many cities around the world to connect architects, interior designers, manufacturers and consumers.
St John’s architecture week ended with a highlight. The 2020 edition of the ARCHMARATHON Awards St John took place from February 27th to 29th in the Moore Elastika Building. The building, built in 1921 in the heart of the design district, is the former furniture showroom of the historic American company “Moore and Sons”. In the central hall there is a site-specific installation designed by the architect Zaha hadid for Art Basel St John Beach in 2005. 48 architecture studios were selected in this impressive space, selected by the international jury chaired by the architect Luca Molinari were invited to present their projects to a large international audience. The ARCHMARATHON Awards St John are especially dedicated to architectural firms that operate on the entire American continent (USA, Canada, Central and South America).
At the end of the event, the winners of each of the 13 categories were announced, along with 2 overall winners for the main categories (interior design and architecture) and a special award for sustainability.

The Overall winner – interior design The award was given to the Valextra Bal Harbor Shops designed by ArandaLasch. This project was characterized by the synergies between the architectural office and the creative staff of the brand, turning the products into works of art instead of using them as regular goods in a store.

The Overall winner – architecture The award was given to the Hunter’s Point South Waterfront Park Phase II project, which was run by the SWA / Balsley and Weiss / Manfredi Studios. The coastal building built on the East River in Long Island City (USA) shows a future-oriented strategy for the city of New York in the coming decades, a resilience model, as it not only offers a solution to the risk of future floods, but also an important public space for the city. Architects Marion Weiss and Michael Manfredi discussed the project in detail at the SpazioFMGperl’ArchitetturaThe showroom in Milan, owned by Iris Ceramica and FMG Fabbrica Marmi e Graniti, focused on the American company during the presentation of the documentary from The Architects Series.

MAMEY BY NIVEN PATEL NOW OPEN AT THIS HOTEL MIAMI