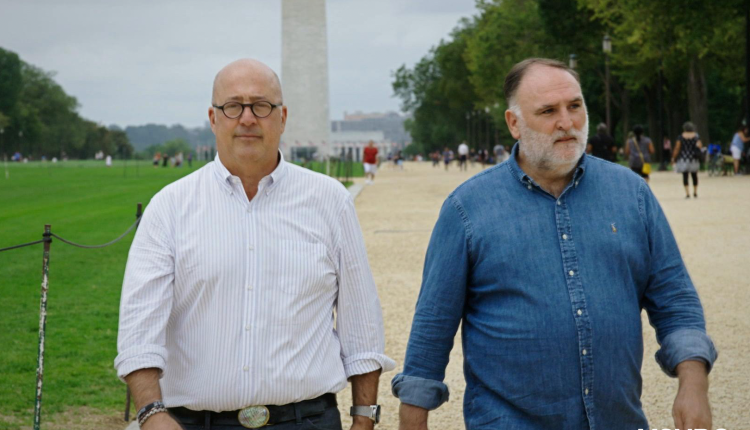 Andrew Zimmer is no stranger to St John. The four-time James Beard Award-winning television personality, writer, and cook visits South Florida annually for the South Beach Wine & Food Festival and was recently in town for the Taste of the NFL over the Super Bowl weekend. He’s also announced his new show on MSNBC – What’s Eating America – which will premiere this Sunday, February 16 at 9:00 p.m.

What America eats is not your typical culinary show, however. It delves into the most important issues the nation faces and how it all relates to our basic human need for food. The five-part series will feature a two-hour premiere in which Michelin-starred Spanish-American chef José Andrés talks to him about immigration and its role in the nutrition of Americans. The remaining four Sundays feature one-hour episodes on climate change, addiction, politics and health care.

Zimmer is known for giving his opinion and starting a thought-provoking dialogue. He explains his concept for the show: “Food is so popular on TV, but it’s mostly seen on game shows, travel shows, and home shows that the majority of Americans don’t appeal to who doesn’t have time to cook dinner? If not now “When? If not me, then who? It’s time we had a show that was fun, informative, and explored the real issues around food in America. We can tell stories and shed light on different topics, and me.” think this is important. ”

According to Zimmer, the nation is so divided at the moment that there is no willingness to hear the other’s views, but rather a lot of pointing and not enough movement forward. By giving these hotly debated topics a platform for knowledge and understanding on a more reliable level, rather than “having a talking head behind a desk,” we can find a way to make an impact. He seriously shares, “I hope this show will bring people around the table to talk about what matters to us, to motivate the leadership to make changes where they are needed, and to keep moving through that Defining things we do have more in common than the things that tear us apart. “

Andrew Zimmer explores the United States through the lens of food in his latest show, What’s Eating America.

Though St John isn’t on the show, Florida has quite a bit of airtime during the episodes of climate change and voter repression in which Zimmer interviews Congressman Charlie Crist and suffrage activist Desmond Meade. Zimmer shares that one of his favorite moments on the series is in the episode of Climate Change in Apalachicola Bay, near Tallahassee. And after recently sharing a moving post on Instagram about his sobriety anniversary, he says the addiction episode is a very personal one that he hopes will spark change and shed light on a dark, complex topic. “The biggest thing we can do is remove the stigma even further,” he says. “We have to take better care of our colleagues in restaurants by asking if they are okay. The number in the hotel industry is almost twice that of the rest of the population.”

Zimmer will be returning to St John for the South Beach Wine & Food Festival in a couple of weeks, and he says he has a lot to eat. “It’s my annual pilgrimage to Joe’s Stone Crab. I’m not sure there is a city in America that is defined by a restaurant, and I don’t want to minimize the incredible, diverse food scene. The food in the city is phenomenal. But it’s amazing how a traditional restaurant represents so much of what the city means to travelers and tourists. ”

In the midst of the festival’s marathon, he’s also planning to venture into Hialeah for Nicaraguan tamales and the design district for Ember. “I’m a huge Brad and Soraya fan [Kilgore] I’m doing it at Alter and their new restaurant so can’t wait to visit them and eat Brad’s food. I think he’s one of the great young chefs working in America. “Zimmer also likes to talk about the James Beard Award-winning chefs Michael Schwartz and Michelle Bernstein, who have shaped and continue to impress St John’s restaurant scene for many years.” It’s chefs like Michael and Michelle who are so talented at bringing flavors to a plate that while you eat you feel like you’re being hugged from within. ”

What is america eating Premieres at 9 p.m. Sunday February 16 on MSNBC.

Look Up Column: Having fun with Orion, the Hunter – Way of life – The St John Information-File